Fast Backup & AMP Restore Windows System: Many people especially young people prefer to buy brand computers as their first computers because they don’t know much about computer. The brand computer also has other advantages. For example: Already installed Windows operating system, you don’t need to install it by yourself. Have built-in one-click recovery programs, some even made factory backup before selling. Thus, when your computer breaks down, you can recover to an earlier state or factory state directly.

Many people like the default backup programs provided by vendors. However, for DIY machines, how can they enjoy the service? Don’t worry, there is much third-party software can give you the same services or even better. For instance, resize the partition(eg, extend system partition), re-install system, the vendors’ backup image files may be affected. Third-party tools’ image files won’t be influenced usually. Third-party backup products can also be used on brand laptops and desktops. AOMEI OneKey Recovery, a strong one key recovery software for Windows, could do you a great favour. Next, let’s learn about it.

Download, install and run it, AOMEI OneKey Recovery’s main interface is very clear and cool. Two big buttons on the left and right. Even children know what do they meaning. Click the left backup button to create a system image quickly, few steps with descriptions to go. 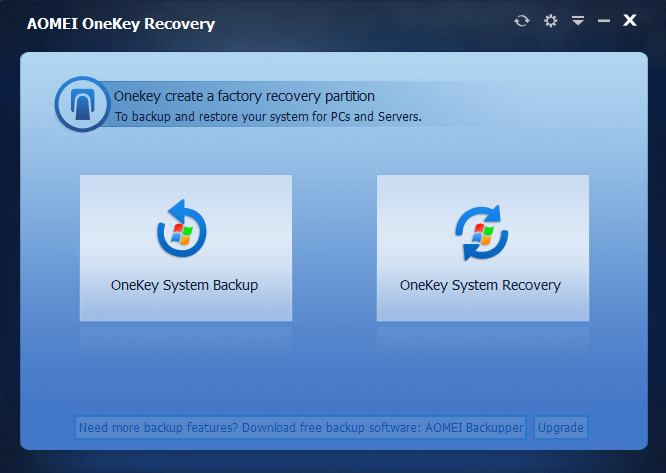 Click the right recovery button to recover. You can also press F11 (default) or “A” key during computer startup to do recovery, similar to brand computers’ recovery programs.

AOMEI OneKey Recovery free edition is enough for common users. If you don’t satisfy it, you can try advanced editions. Those high editions provide more choices. Such as: the Backup system to other location, change the compression level of the backup, add encryption for the backup, manually set prompt time interval during startup, hide the notice info at boot, customize logo UI and rebrand, etc. Some advanced editions allow one license for more people to use, thus saves money for companies and schools.

Protecting data is an important thing and backing up is an effective method. AOMEI OneKey Recovery provides an easy and fast way, it helps us save valuable time. If you want to backup disk, partition and files too, we recommend you to try AOMEI Backupper, the same developer of AOMEI OneKey Recovery.

Hope you like this post about How to Fast Backup&amp; Restore Windows System? Having any issues feel free to leave your comments below in the comments section.

How to Check your passwords against the Pwned Passwords database

How to disable notification in Windows 10

How to Solve This – Files Are Not Showing In External...

How to set a picture as a password in Windows?