Home Computing What is the difference between KBps and kbps?

Difference Between KBps and kbps 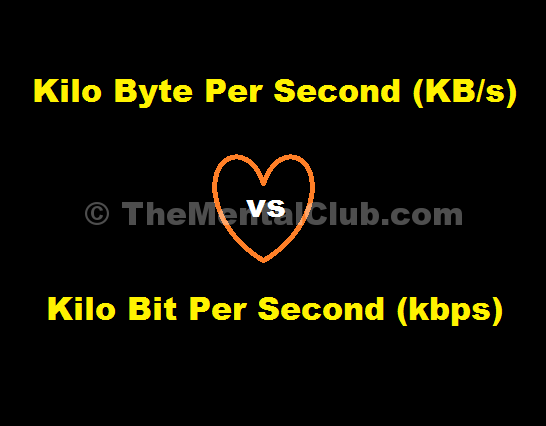 We can write 1KBps (KiloByte Per Second) as 1KBps/ 1kBps KB/s.

When we purchase any data plan from any internet service provider, then they give us two things, one is bandwidth (i.e. 512 kbps) and other is data usage limitation (i.e. 5 GB or 10 GB).

If you purchase the above plan then your download speed will be 62.5 KBps (Bilo Byte Per Second).

List of All Important Notes That Clears What is the difference between KBps and kbps?

You can do it by using this formula:

Read: How to Control Internet Speed by using NetLimiter Pro

Suppose, you have purchased 512 kbps plan, so our kbps value=512

In fact, we get a bit more, so they are not exploiting us. Maybe, we realize a little.

What is the difference between MBps and Mbps?

“MBps” stands for Megabytes Per Second

“Mbps” stands for Megabits Per Second

Feel the speed – thank u for reading…. Please leave a comment if you don’t understand.

What is the Intel Core M Processor

Learn How to Manage All Computers’ Backup Tasks From A Center...