Android Mobile Phones Screen are Getting Black, Learn how to Fix This Problem, and Fix Screen Blackout Problem on Android Phone

A smartphone is made using thousands of components (Hardware). Because of this, there are few drawbacks in the phone. Some time charging does not work properly, Battery Drain quickly, and heating problem observes. These are the common problems. Similarly, Some time camera problem is detected, and Screen is Getting Black. Users ignoring the camera and heating problems but Screen Blackout, cannot be ignored, Because if you do not see anything on your mobile screen, then you aren’t able to any work at the same time user also upset because of the cost of black screen fixing is very high. You can fix the black screen problem through these tricks. How to Take Bokeh Effect Images on Your Single Camera Android Smartphones

If the screen is completely dead, then you have to go your nearest the service center. If the phone’s screen is black on the go and suddenly turns back in a few seconds or minutes, then it can be solved. Users told that black screen problem seen during the call, camera access and during the internet access. This type of problem can be solved easily. So let’s say how to fix Black Screen (Screen Blackout) Problem. The solution of Windows 7 Black Screen Problem 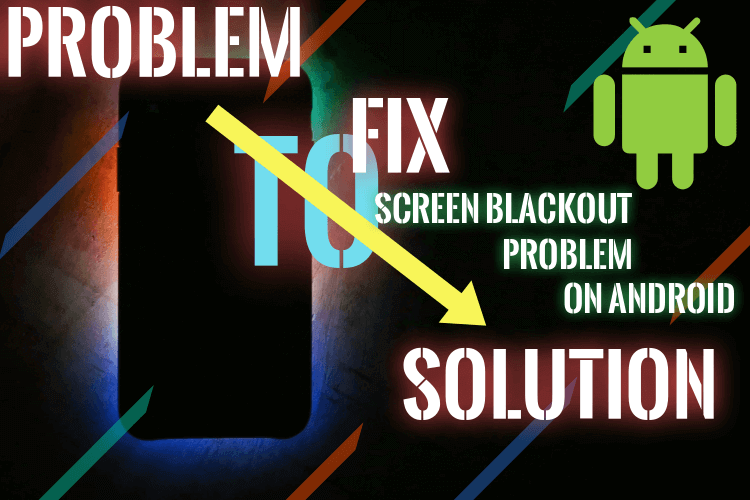 The Reason of Screen Blackout

If your phone has a screen blackout problem, then you first need to check your phone well, Check when your Phones Screen are Getting Black. If you find it, then this problem easily solved. Just like when running the Internet or during calling, using the camera, during the using other apps or any time. Note these things and follow these tricks.

How to Fix Screen Blackout Problem on Android Phone

The biggest reasons for screen blackout are uncommunicable apps. Some new or older apps are not compatible with the OS of the phone or there is a problem of app coding.

If you recently installed an app on your mobile after that this problem has started, Then first uninstall that app. If fix the problem then it is okay otherwise Start your phone in safe mode. For this, First of all, turn off your phone then press the power button. As soon as the phone gets started, you have to press the volume up and down buttons together.

According to the brand, the way to start the phone in safe mode can be different. Once the phone starts in safe mode, then you use it for a while. If it’s working correctly then uninstall those apps that you installed recently. If you are having trouble then use another trick. Delete These 22 Harmful Android Apps From Your Mobile Without Delay

The battery of the phone may also be bad. Today, in unibody phones where the battery can not be replaced by itself. it is not necessary that such problems come only in the old battery. It can also happen with the new battery.

Black screen problem (Screen Blackout) also happens when the battery is bad. If the phone’s battery is released, check it once. If the battery does not come out then go to the service center. Do not open at home. If everything looks okay, even if the screen is blackout any time, then you can take the support of the Ampere app to check the battery. This app tells about your phone’s battery health. Try These Ways To Improve Mobile Battery Performance

You probably don’t know that due to the poor quality charger Mobile Phone Screen are Getting Black. Because of Defective or Poor Charger does not supply right volts to charging the battery, then your mobile battery is not charged properly. Because of this, the problem increases on your phone.

Charge your phone with original charger. If you have recently brought a charger from your nearest market and then this problem has started, then try using a new Original Charger.

If you use a micro SD card on your phone and you have store music, photos, videos etc. and the phone’s screen is getting blackout during its use, then understand that the card is damaged.

Due to viruses or scratches MicroSD cards get corrupted then it becomes difficult to access the data. If the card is corrupted in the phone then, the screen can also be blackout. In this case, remove the SD card and restart the phone. Your phone will work correctly. SSD vs. HDD – Know Which is Better – Solid State Drive Or Hard Disk Drive

The smartphone is always at risk of getting viruses through to the Internet. If the virus is stuck on your phone then your phone Screen is getting black and hang.

However, the problem of screen blackout found most of the old phones. An old phone does not mean the phone got spoiled. Due to the phone’s memory full, this type of problem noticed on your phone.

In this case, Delete the cache memory from your phone and uninstall some apps then the screen blackout problem can solve. If the phone is reset to Factory data, then it is much better.

The problem of screen blackout can also be due to the old software.

If your phone is out of date, then watch the software along with the storage. Many times, companies give updates to eliminate phone bugs, but we ignore it and then this type of problems hanging or screen blackout perform on our phone. If there is any software update in the phone, then update it immediately. What is Android One? Benefits And Advantages

How to Create Your Logo with Online Logo Making Program

How to Integrate Salesforce with Third-Party Apps

How to hide running applications/programs from the taskbar in Windows?

How to Get Google View Image Option in Search Results

How to Recover Permanently Deleted Emails

How to install MAC OS on Windows Computer?