Home Technology Types of Electromagnetic Waves and Their Applications 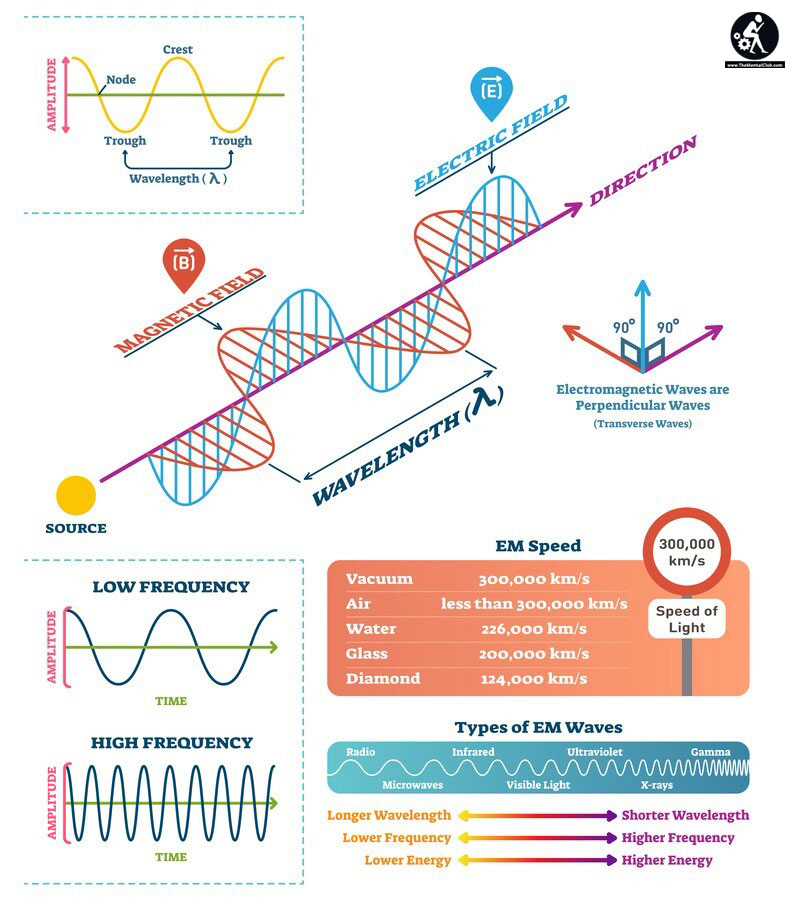 A simple comparison of radio waves vs microwaves can help you understand the differences between these waveforms. To help you know better, here are seven types of electromagnetic waves and their applications in our daily life.

Radio waves have the highest wavelength and lowest frequency when compared to other waveforms in the EM spectrum. Natural sources like lighting and artificial objects such as mobile phones and satellites emit radio waves.

The radio waves carry signals that are received by television and radio antennas. The frequencies of radio waves are commonly used in radio communication, TV broadcasting, computer networks, and radar. The wavelength of the radio waves can range between 3 kilohertz and 300 gigahertz.

While there is not much difference between radio waves vs. microwaves, it is shown that the frequency of microwaves ranges between 1 GHz and over 100 GHz, which isn’t the case with radio waves that can be miles in length.

Microwaves can penetrate obstacles such as smoke, rain, and clouds. They are used in landline phone calls, radar, and microwave ovens. The prefix “micro” in the microwaves indicates the shorter wavelengths than that of the radio waves invented before.

Infrared waves are located between microwaves and visible light on the electromagnetic spectrum based on their frequency and wavelength. They are classified into three types – shortwave, mid-wave, and longwave.

The sun is the most potent natural source of infrared radiation. When infrared radiation impacts biological tissue, it causes molecules to vibrate, resulting in heat production and a temperature rise. That’s why the thermal radiation from the sun and other artificial sources like infrared heaters have found their place in medical applications.

Visible light is the reason everyone can see things around. The various wavelengths that human eyes can see belong to the visible light spectrum. There are different frequencies of visible light that people observe as the colors of the rainbow. The lower frequencies are detected as reds, while violet hues identify the higher frequencies.

Ultraviolet waves have a shorter wavelength as compared to seen light. The UV rays from the sun can cause sunburns and cancer when exposed for a longer time. The ozone layer protects residing organisms from dangerous UV rays. UV rays are used in astronomical observations with the help of giant telescopes such as the Hubble space telescope.

X-rays have shorter wavelengths than ultraviolet waves. At this wavelength, x-rays are considered more as particles than rays. They can penetrate through skin tissues and muscles depending upon the quality of the X-ray beam. They also help in imaging tests of bones.

Only the most energetic cosmic objects such as supernovas, black holes, and neutron stars emit gamma rays. They have the highest frequencies in the EM spectrum. Gamma wavelengths can pass through the space in the atom and are measured by subatomic level. Gamma rays have broader applications in medicine, providing effective radiation therapies.

Hope you’ve understood all these radio waves. If there is any issue, then you can leave a comment. Thanks.

What is Virtual Private Network (VPN)?

What could be the reason of your death in using a...