Home Internet Satellite Broadband Internet. How the Internet is possible from Dish Antenna? The...

Satellite is done these three main works for us. You cannot watch these in the sky in your open eyes, but starting from the TV broadcast, international calling, and weather news, and satellite is doing works day to night by conducting satellite internet. Today, we know about the Satellite broadband internet- how do perform it? How beneficial is it? Its advantages and disadvantages.

It does not mean that Satellite means a rocket in where so many instruments are inserted. The general meaning of the satellite is a very simple – a small space object is orbiting around a large space object is called Satellite. For example, being earth’s permanent satellite, the gravitation is forced to orbit around the earth. The satellite which looks like a rocket and we leave these in the earth is an artificial satellite and these are orbiting continuously in a counted way. It can orbit in a circular or a semi-circular way and can orbit at various distance from Earth. Generally, it is situated above the atmosphere.

The main object of sending satellite is to know about different geographical limitations- this helps us to keep an eye on the earth, as a result we know about our life history. In space, there are so many satellites are being there. These provide us about the weather news, some are the navigations like supply the GPS data and some are used for the communication. Satellite phone calls or satellite internet or communication are being done for satellite. Communication satellite works like a mirror- it reflects signals which come from the earth and send back these signals to the earth. Suppose, you want to call from the jungle or any hill region, where a normal phone does not work because you cannot get any tower’s signal – you can call by using the satellite phone. In this case, a signal from your phone will go to the communication satellite and reflects this signal and then come back again into to the earth. 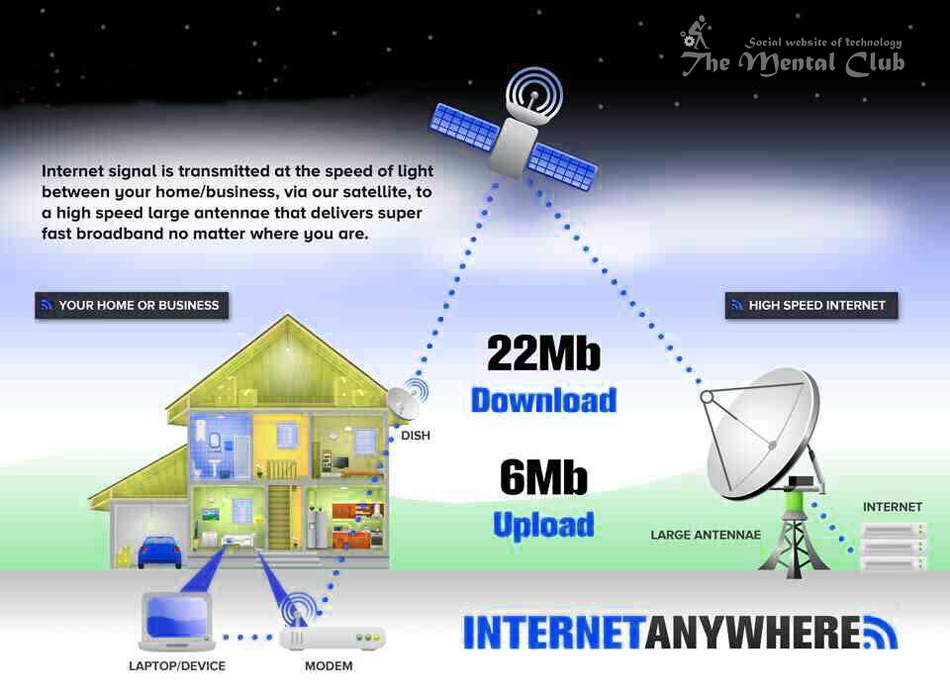 One thing you have to keep in mind that so many users think that internet is available from satellite TV signal and there is no additional cost. Yes, it is technically possible, but the proper hardware and devices are required, moreover, your dish provider can ban in any time. But for using properly satellite internet, you have to take the service from internet service provider, because for using this internet, a complete set up is very essential. For completing the satellite internet, complete 3 satellite dish antennas are required: one the internet service provider use it and sends the signal (is called Provider Hub) and the other is on the space and the last one is being on the roof of your house which receives the signal.

How does the Satellite internet work?

I told that Satellite use Internet data, TV, call and radio signal and it can be able to send these from one place to another place in the earth. You have to do three steps for sending the radio signals by using the satellite. First works Uplink, it throws the internet signal to the satellite from the dish antenna of the service provider, next to this signal is received by satellite and it is processed by using radio receiver, amplifier, and transmitter. By this processing, the strength of the signal is increased and change its frequency as there is not making any problem in between receiving signal and sending the signal. There are so many radio receiver, amplifier, and transmitter are inserted in one satellite as it receives signals from the service provider and at the same time it also sends away the signal to the earth. 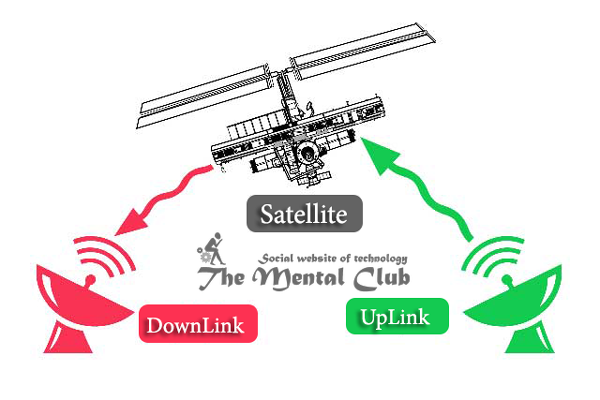 And finally download link, another dish antenna which is situated in our earth, it generally inserted in our house. There may be millions of download links are being there behind an uplink. For example: if a satellite internet service provider has 1 million consumers, then 1 million download link will being there from one uplink. Satellite mainly supplies data from uplink to the download link. You can get proper internet from receiving signals if you add some cables, router or modem with the satellite dish.

How do you use the Satellite Internet?

The main cause of using satellite internet is that if you live in such kind of place in where cable or DSL depended on broadband or mobile broadband is not available. If you operate 2G internet from your village, then the satellite internet may be ideal for you because it is much faster.

Let’s know the advantages and disadvantages of the satellite broadband internet:

Weather Disturbance: Due to the bad weather, the connection quality may be caused disruption in the connection. Rain, clouds, snow and high winds have all contributed to the lost data signals which lead to loss of connectivity and interruptions in this service.

Latency: In satellite internet, the latency or ping rate is very high. Ping is the measurement of time about how long it takes connecting your computer from the internet server. As your all data go through the satellite to the ISP, and then from the satellite it goes to the ISP and the same data come to you, as a result, the time is required to do it properly. So, in satellite internet, the ping rate is very high, as a result, online gaming is not ideal for this. But, it is connected to the server, then it can transfer data at high rate.

VPN: In satellite you cannot use VPN correctly. The low ping rate is required of using VPN. You may also read: What is VPN and how to use VPN?

Costly: The main problem is that the satellite internet is comparatively more expensive than either cable or DSL. For 1 Mbps connection, the cost may be 8000/- per month. If you use bandwidth in per month, then your ISP will enable the fair use policy (reduce the internet speed).

Answer: The general antenna of your TV does not receive any digital signal, it is an analogue antenna. In here, the main point is you are receiving the signal which is digital or not. The general antenna receives the signal from large tower which comes from the television centre and it does not come from the satellite. In there, TV picture and sound sends as a picture or sound, through the electromagnatic wave, and your TV shrinks information continuously and displays the sound.

But, to get the internet, the digital signal is required in where signal is not being there in picture or sound but the signal is being there as a digital or Bit (Binary Digit). That is , it receives numbers. general antenna does not receive bit. For this, satellite antenna (dish antenna) receives bandwidth from the direct satellite. You can easily get the internet by attaching the device. But, there are so many difficulties.

Hopefully, you get so many information after reading this tune. Are you using satellite internet or do you interest for using it? Please share with us.

How much are secure your personal data/files in the cloud or Google drive or One drive?

Is your iPhone’s Internet connection sluggish? How to Proceed:

Use of Google Public DNS in PC and Smart Phone

How to Find the IP Address of a Website Using Command...

Preparing for the Next Decade of Internet Growth