Deoghar is an important tourist destination in the state of Jharkhand. Deoghar is popularly known as ‘Baidyanath Dhaam’. This district has various pilgrimage centres, which surrounded the whole district. Deoghar is a place where one can take a break from drudgery daily monotony & simply rejuvenate. Geographical location of this district is totally interesting. This district also surrounded by the beautiful hills and various temples of the Hindu goddess. During the Bengali month of Shraban, this district collects huge numbers (8 million approx) of devotees from different places, including West Bengal, Odisha, Bihar, Chhattisgarh etc. The devotees come here to complete their worship near Lord Shiva. Here in this post, I have prepared a full list of tourist spots in Deoghar. Read this article to know about the 10 best tourist spots in Deoghar district. Trikuta Parvata, Baidyanath Dham, Basukinath Temple, Nandan Pahar, Naulakha temple, Vaidyanath Jyotirlingam Temple Deoghar, Ramakrishna Mission Vidyapith, Shivaganga, Tapovan, Deogarh Palace, Temple of Jain Tirthankara Shantinath, Baiju Temple, Dev Sangha Math, Dolmanch, Harila Jori, Hathi Pahar, Kundeshwari, Lila Temple these all are the major attractions of Deoghar district. August (Bengali Month Shraban) is the best time to visit this destination because this time you can enjoy the main festival (Mahashivratri) of this district. 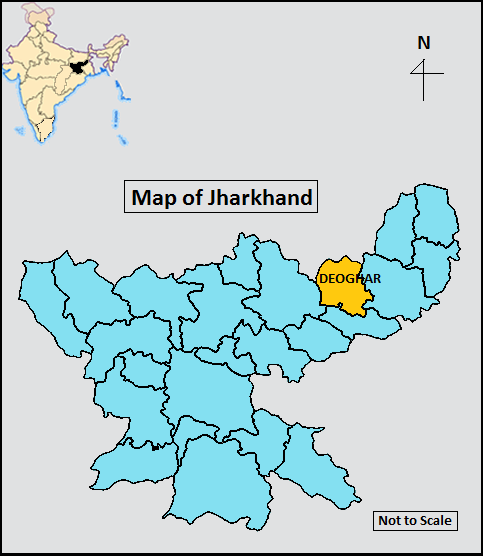 Let’s have a look at the list of best Tourist Spots in Deoghar District [Jharkhand, India]

Trikuta Parvata in Deoghar district
1 of 3

Trikuta Parvata is popularly known as Trikutachal. It is located at a distance of 10 kilometres from Deoghar on the way to Dumka. This parvat is the combination of three main peaks, which are situated at a height of around 1740 feet. At the top of the hill, there is a garden, which is famous as the Garden of Shiva. This site has trees of wood apples and visitors mainly come here to collect wood apple leaves. In the middle of the garden, there is a temple of Lord Shiva, which is known as Trikutachal Mahadeva Temple.

Baidyanath Dham In Deoghar
1 of 2

Baidyanath Dham or Baidyanath Jyotirlinga temple is one of the famous shrines of the twelve Jyotirlingas. According to the Indian mythology, it is believed that Ravana (The Demon King) worshipped Lord Shiva and offered his ten heads as a sacrifice. Then Lord Shiva highly impressed by the Ravan’s sacrifice and came to cure him as a Vaidya. Vaidya means a doctor and the temple derived its name from Vaidya to Baidyanath. During the Bengali month of Shravan huge numbers of devotees come to wash the Jyotirlinga by the water from the Ganges.

Basukinath Temple is situated near the village of jarmundi in Deoghar district.  This temple is dedicated to Lord Shiva and Its present an example of local art. This holy temple is surrounded by various small temples. It is said that this temple is connected with Ghatwals of Nonihat. Now, this temple is considered as one of the major pilgrimage centres of Jharkhand state.

Nandan Pahar and Park in Deoghar
1 of 2

Nandan Pahar is a small hill in Deoghar. The Nandi temple is the major attraction of this place. Near the temple, there is a huge amusement park for children. This entertainment park has a ghost house, boot house, mirror house and a restaurant. Now it’s become an ideal Picnic Spot. Swimming and boating facilities also available here.

Naulakha temple at Deoghar District
1 of 2

Naulakha temple is located at a distance of 2 kilometres from Baba Baidyanath temple. This beautiful temple making cost was 9 lakh that’s the main reason behind the name of this temple.The architecture of this temple is very similar to the temple of Belur Math. This temple is dedicated to Lord Krishna and Radha.

Dev Sangh Ashram is also known as Nav Durga Mandir. This temple is dedicated to the nine avatars of Goddess Durga. Lord Shiva, Goddess Saraswati, Annapurna these all are the other famous idol of this site. Durga Puja is the main festival of this place. During this time the temple collects huge numbers of visitors from West Bengal, Orissa, Bihar and other states. The Samadhi of Acharya Nerendranath Brahmachari is situated on the north of this temple, which is another attraction of this place. 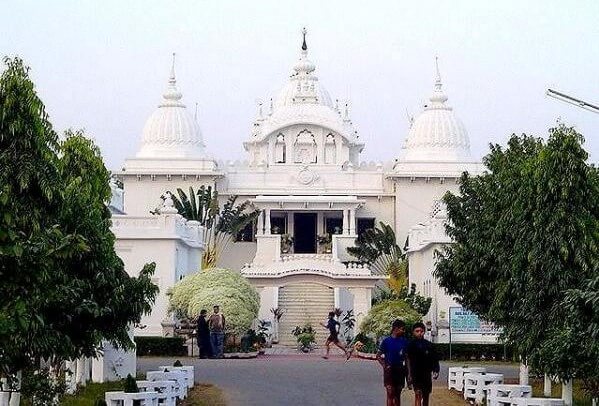 Ramakrishna Mission Vidyapith is one of the ancient education institutions of Jharkhand district. It was established in the year of 1922. This ancient institution is famous as a preserver of old culture. This educational centre is the great attraction for every disciple of Swami Vivekananda.This institute has a beautiful temple, which is dedicated to Shri ram Krishna. Every year this institution host various religious festivals. 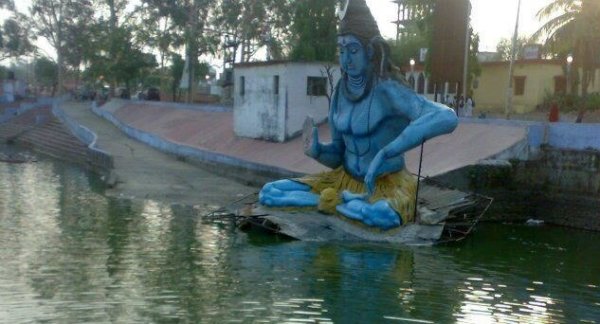 Shivaganga is a small village in Deoghar district. It also is known as Varvoghar Kund. This place is highly related to the mythology. It is believed that once king Ravan made a blow with his fist on the earth, that time a huge water stream came out and formed a pond, which is known as Shivaganga. Now this place became a famous destination and Devotees come here to take a holy dip in this pond.

The Jain temple is one of the main attraction for Jains. This temple is dedicated to Shantinath, who was a famous Tirthankar. After destroyed the original temple the new temple reconstructed by the supervision of Tarachand Jain, who is a popular social worker. This holy temple has a beautiful library and it has a huge collection of important things such as books, scriptures and manuscripts.

Baiju Temple is located in the main market of Deoghar town. This holy temple was built by the heir of main priests of Baba Baidyanath temple and it derived its name from a Bhil boy, who was known as Baiju. This temple is dedicated to Lord Shiva. The tallest idol of this temple is the main attraction of this site. As per the history, it is believed that once a Bhil boy lived in temple premises but he doesn’t know anything about worship. Then Lord Vishnu thought him about the worship. After the lesson, the boy easily understood the whole matter and started worshipping. Since that time to present time, following the same method every devotee come here and complete their worship and they believe God fulfil their all wishes.

Dolmanch is a famous tourist attraction of Deoghar district. It is located at a distance of 2 kilometres from Deoghar town, near the main market. It is a small temple of Radha- Krishna which is made of stone. During the time of Holi festival, most of the people of Deoghar district gather here and celebrate the festival.

Harila Jori is situated at a distance of 5 kilometres from Baidyanatyh temple. It is also known as its popular name Harihar Jori. The temple of Lord Shiva is the main attraction of this site. The site also has a huge tank, which is known as Shool Hqarini Tank. Local people believe that this site is famous as a meeting point, where both Lord Vishnu and Shiva met each other. Now, this site became a renowned pilgrim centre. 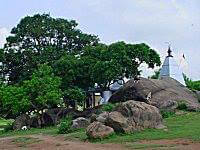 Hati Pahar is also known as Mahadevatari. It is one of the popular destinations of this district. Generally, this Pahar name is Mahadevtari because there is a beautiful temple of Lord Shiva. This Pahar is derived its name from its own structure. Actually, this Pahar looks like an elephant and there is a small water tank situated very close to the Pahar. Mainly devotees come here to complete their worship and take a holy dip in the water tank. They believe that this water tank has a power which can cure all diseases related to stomach. 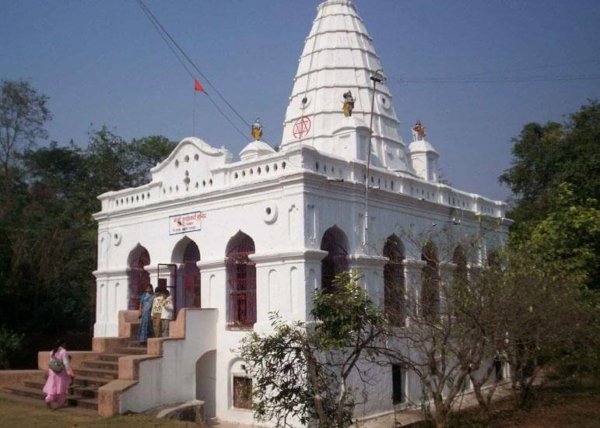 Kundeshwari is the house of a beautiful temple. The name of this temple is Nava Graha Temple. It is situated at a distance of 1 kilometre from Chandi hill. The temple of Nava Graha was built by Late Ramapada Bandopadhyay in 1911. There is a Kali temple also, which situated beside the Nava Graha temple. This Kali temple was constructed by Fakir Chandra Chatterjee. Local people every day gather here to take a small break. The other shrine of this site are Goddess Parvati, Ganesh, Lakshmi- Narayan etc. 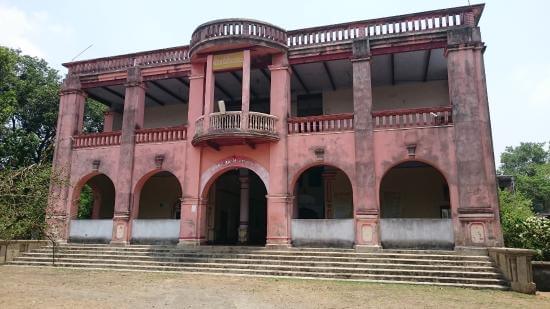 Lila Temple is located at a distance of 5 kilometres from Deoghar city. This temple was built by Thakur Jayanand Deo. It is also known as Arunachal Mission. This temple is dedicated to Goddess Kali. The huge idol of this temple attracts many tourist eyes.

If you love adventure, so friends don’t waste your time and visit all amazing destination in Deoghar District, which I have already mentioned.