Home Tourist Spots Taj Mahal – The wishes of all hearts

Taj Mahal the wishes of all hearts:  Hi, Guys! It’s Amit again. Today I am going to share with you about the Taj Mahal symbol of India architectural jewel monument to a grand passion. It is one of the famous landmarks in India. Mainly people come here to gather more experience about the history of this Palace. Read this article from beginning to end to know about all secrets behind the world most popular architecture.

Taj Mahal – The wishes of all hearts 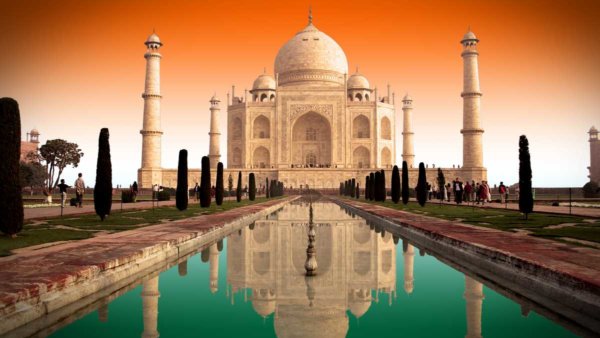 The Taj Mahal is an important tourist destination located near the city of Agra, Uttar Pradesh. It attracts millions of visitors each year, who come to see its beauty and remember the romantic story behind it. The Taj Mahal was built in 17th century by Shah Jahan king of the world ruler of India’s mighty Moghuls Empire. This great warrior king gave the world an architectural masterpiece of an architectural masterpiece of a kind it had never seen before this is how it came to be made. It is also the legend of his queen the beautiful Mumtaz Mahal and of their love to perfect to survive. The chosen one of the palace will have her final resting place in the world’s most beautiful building.

Numerous view of Taj Mahal
1 of 4

Nowadays the Taj Mahal is one of the world’s greatest tourist attractions. Every year more than 3 million people come to see humanity’s loveliest building with their own eyes. But for the Indian nation, the Taj Mahal is much more than an architectural masterpiece. The monuments that make India what it is that gives the people their identity it makes them proud as building as a symbol of the whole nation.

Taj Mahal was built in one of the most glorious periods of Indian history. The time of the Moghuls with their mighty empire and fabulous riches its creator a man who dedicated his life to a dream great mogul Shah Jahan.

Which is the best time to Visit this destination?

Winter is the best time to visit this destination because this time you can easily communicate with all places.

History of Taj Mahal
1 of 4

The Taj Mahal its – its name is Persian for ‘Crown of Palaces’ – is an elaborate mausoleum, or grave. It was constructed more than 350 years ago by Emperor Shah Jahan of Indian as a memorial for his beautiful wife, Mumtaz Mahal, who had died. Shah Jahan met his future wife when he was fifteen years old and she was fourteen, although they were not married until five years later in 1612. Their marriage was a happy one, as the two loved each other and were good friends as well. Shah Jahan gave his wife the title Mumtaz Mahal, which means ‘Chosen one of the palace’ and together they had fourteen children. It was while giving birth to her final child in 1631 that Mumtaz Mahal died. Shah Jahan was heartbroken and decided to build a memorial for his beautiful wife in Agra, on the banks of River Yamuna. Construction of the Taj Mahal began in the year 1632. It was an immense project: more than 25000 workers were involved and materials were transported by more than 1000 elephants. The style of the building was inspired by Persian, Islamic and Indian architecture and the grave was finished with huge slabs of white marble and decorated with many precious and semi-precious stones. Elaborate patterns of tile and even poems written on the walls in careful calligraphy decorated nearly every surface. The tomb took about 12 years to build, but the work was not over yet. The tomb itself is only part of a much larger complex and is surrounded by elaborate gardens with pathways and pools of water that are positioned to catch beautiful reflections. There are also minarets, a mosque, and a gateway. Construction of the rest of the complex took an additional ten years, meaning that the entire project took 22 years to build. The cost is estimated to have been 32 million Indian rupees, an equivalent of about $827 million US dollars today. It is said that Shah Jahan planned to build a second Taj Mahal across the River from the first, made completely of black marble, as his own grave, but when his son overthrew him and rose to power the plans were discarded. Whether this is true or not, it is probably true that Shah Jahan did not plan to be buried in the Taj Mahal with his wife, but that is where his son buried him when he died. A Slightly larger tomb for Shah Jahan was added next to Mumtaz Mahal’s, marking the only place in the tomb that the symmetry is broken. Shah Jahan and his queen are not actually buried in the tombs that are on display: those are empty. Instead, their bodies are buried beneath the Taj Mahal. Through the centuries, the Taj Mahal has survived it has been described as ‘Poetry in Stone’, and a teardrop on the cheek of time; and has been designated a World Heritage Site for being “the jewel of Muslim art in India” and a “universally admired masterpiece”.

The Magnificent chambers of the Taj Mahal hide a secret and Shah Jahan will pay a terrible price to complete his life’s work at a turning point in India’s history. The building that emerged from his plans perfectly combines grace and scale power and beauty. Samrat Shah Jahan decided to build a good foundation and cheating that was a revolutionary idea for those times enormous innovative. The great moguls’ engineers dig deep wells to below the water table, then they fill them up with rocks and mortar. On this base, the master builders erect stone columns linked together by massive arches. The result a solid mountain of stone to support the foundation slab of the building. Protecting the Taj currents of the Yamuna River forever.

Secrets of taj Mahal
1 of 4

An optical trick went into the building of the minarets too they leaned slightly outwards. If they were truly vertical they seem to be leading inwards. By leaning away from each other they look perfectly upright and that brings another advantage in an earthquake the minarets would collapse outwards sparing the Taj and its mighty dome. The dome is the crowning glory of the Taj Mahal. The element that makes it so timeless and graceful.

The first view of the monuments is framed by the main gate as the visitor’s moves closer the Taj Mahal seems to get smaller. It seems to grow bigger as you walk away. The guides here say when you leave you to take the Taj with you in your heart.

Watch the review of Taj Mahal

Today it is a symbol of India and one of the most popular landmarks in the worlds, as well as an enduring symbol of love that was meant to last forever. I hope you enjoyed reading about the Taj Mahal.