Home Hardware The Procedures of Installing the Microprocessor

Hi , guys. How are you? I am fine. Today I am bringing you what is front of the many people you know, may be . But  guys, for those who does not know about the procedures of installing the Microprocessor. So, guy, don’t waste our time. Let’s have a  look at the sackcloth how do we install the microprocessor. This is very simple.

The motherboard has one or more slots or sockets to hold the microprocessor. The type of sockets or slots are used dictates the type of processor that can be used by the motherboard. 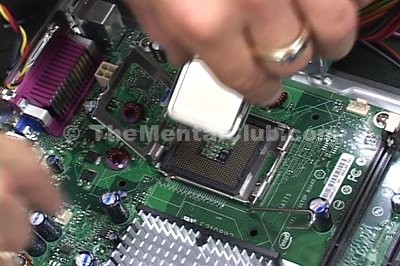 For Square Sockets :  Because the CPU  is so sensitive , its slots is very intricate . It is flat and generally square. Examine the top of the processor that should have a small dot in one of the corners. This dots indicate where pin one is located on the bottom of the processor. Now look at the socket on the motherboard. This socket should have the missing hole or should have a 1 indicating pin one.

Some newer processors also have a zif socket or a zero insertion force socket which is used to protect the pins on the processors during insertion. The main addition is the presence of a lock to hold the CPU in place.

Insertion is very easy. Lift  the lever lock. Carefully install the CPU by aligning Pin 1 on the CPU to fit with Pin 1 on the socket. Do not force the CPU into the socket. Check the pin alignment of the CPU pins to socket holes before pressing down. Lower the lever arm until the CPU is held in place.

Not at all CPU’s match all motherboards. Most motherboards will accept more than one type of CPU  as far as model, manufacturer and speed are concerned. But they generally only the accept one-socket type. The major CPU manufacturers include INTEL, MOTOROLA, IBM, and Advanced MICRO DEVICES (AMD).

For Single edge Connectors (SECs): Do not force the processor into the slot. Make sure it is oriented correctly. Find the exposed end of the processor and lower it onto the circuit. Using the support arms as a guide, press down firmly until the processor ids securely seated into the chamber. Pull the retaining clips at the top of the chamber away from the processor to lock it down.

How to test a webcam?

How to change MAC/NIC address in windows