Humayun’s Tomb – The first example of Mughal Architecture: Hi Guys! It’s Amit again. Today I am going to share with you about the Humayun’s Tomb. The 16th-century garden tomb of Emperor Humayun was designated a World Heritage site about standing universal cultural value in 1993. This historical legacy of art an architectural design was the first of the grand dynastic mausoleums built by the Mughals and served as a model for the Taj Mahal built later.

History Behind the Humayun’s Tomb:

In the year 1997 on the 50th anniversary of India’s independence, his highness Lee Agha Khan presented to India the gift of restoring the gardens of Humayun’s grave.

The Agha Khan trust for culture or AKTC completed the garden restoration in 2004. Restoring flowing water after 400 years planting local flora and leading to a thousand percent increase in visitor numbers.

In response to the Ex-Prime Minister’s request, AKTC returned to the site to conserve Humayun’s Tomb with generous funding support from (SDTT) Sir Dorabji Tata Trust. 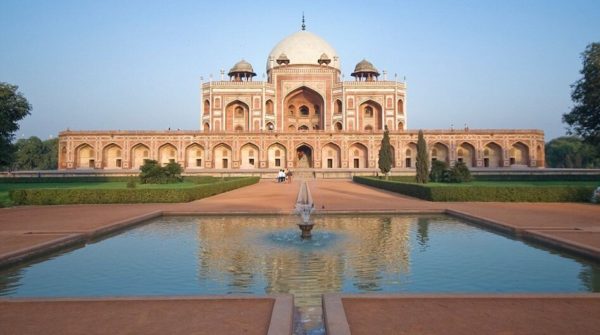 The conservation philosophy of AKTC followed worldwide seeks to improve the quality of life of the neighbourhood communities. The landscaping of Sunda nursery to serve as an ecological buffer is as well an extension of the conservation effort. There is the successful philosophy of conservation work here a comprehensive approach that couples the high scientific standards with the traditional craft that is redefined and set new quality benchmarks for a quality based conservation practice in India today. The Humayun’s Tomb has gained quickly by this and is preparing to reveal its Mughal glory. Open: All days of the week

Significance and information about the Humayun’s tomb:

The tomb of Mughal Emperor Nasir Aladeen Mahammad Humayun is located in heart of Delhi and seems more like a palace than a tomb. Humayun’s Tomb is one of the best-preserved Mughal monuments. This mausoleum is the first example of Mughal architecture in India. The construction of Taj Mahal 100 years later, is itself inspired by Humayun’s Tomb. The tomb features an artful collection, the use of red sandstone and white marble. It was built by Humayun’s wife Hamida Banu Begum and was started in 1565, nine years after his death and completed in 1573. The architecture of the mausoleum has details both from Persian architecture and Indian architectural traditions. While the Persian influence comes from its Persian architecture Mirza Gaia’s who constructed the tomb in the centre of a Persian style char Bagh garden with its quadrilateral form. The garden is divided into four main parts by walkways with flowing water created in a way to resemble the gardens of Paradise as described in the Quran. These four main parts are further separated by channels into 36 parts. Persian influence can also be seen in the arched alcoves corridors and the high double domes. While the influence of the Indian tradition has inspired the creation of the kiosks, which gives the building an outline similar to a pyramid as seen from a distance. From 17 to 19th century the garden was gradually filled with the tombs of Humayun’s descendants and their close followers Mughal emperors are arrayed inside the mausoleum a reason why it is sometimes given the title of necropolis of the Mughal dynasty as no other tomb globally contains such a high number of Mughal emperors and their relatives entombed.

The mausoleum stands on a massive platform of up to 7 meters. The building is constructed of red sandstone. While the tomb itself is made of yellow and black marble. The two storied mausoleum is crowned with a white Persian style marble dome that seems weightless. The height of the Humayun’s tomb is 47 meters and its breadth is 91 meters. The lower tier of this rectangle construction is decorated with arches around the whole perimeter of the building. The central chamber is an octagon with corner chambers, which house the graves other members of the royal family. While the real tomb of the emperor is on the basement floor. In 1993 Humayun’s tomb was declared a UNESCO World Heritage Site, since then several renovation projects have been undertaken in this complex with the efforts of the Agha Khan trust for culture the Archaeological Survey of India and the National culture fund the restoration work continued for over two decades. The monuments and gardens have been restored the water channels relayed and with more than 2,000 trees that have been planted in the gardens. It seems Humayun’s Tomb has now been restored to a part of its former glory. Though the monuments we see could be a shadow of the glorious past. The red sandstone pool glows when the evening Sun shines the magic of the moment makes everything new again.

Watch the Review of Humayun’s Tomb

My Last Words: Humayun’s Tomb is a great mughal’s architecture and one of the most popular landmarks in India. I hope you enjoyed reading about the Humayun’s Tomb.