Agra Fort – A complete destination in India: Hi Guys! It’s Amit again. Today I am going to share with you about the Agra Fort. Agra Fort is the former imperial residence of the Mughal Dynasty located in Agra, India. It is also a UNESCO World Heritage site and is about 2.5 km northwest of its more famous sister monument, the Taj Mahal. The fort can be more accurately described as a walled city. Agra is one of the best travel destinations in India. Beyond the iconic star team health, there are several other Buddhist attractions that are worth visiting here where among them is the Agra fort But before you go you must know some of the interesting facts about the space. 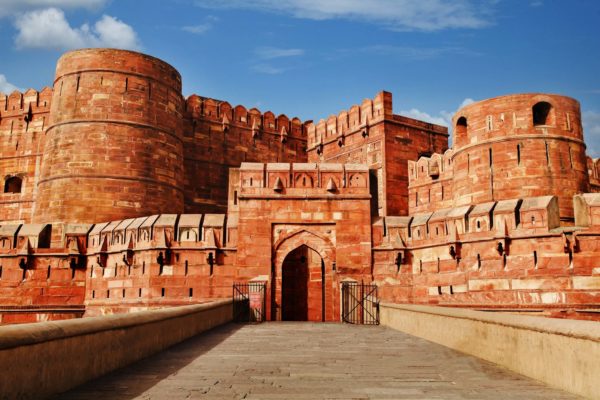 The Agra Fort is an important tourist destination located near the city of Agra, Uttar Pradesh. It attracts millions of visitors each year, who come to see its beauty and gather more experience about the history behind it. 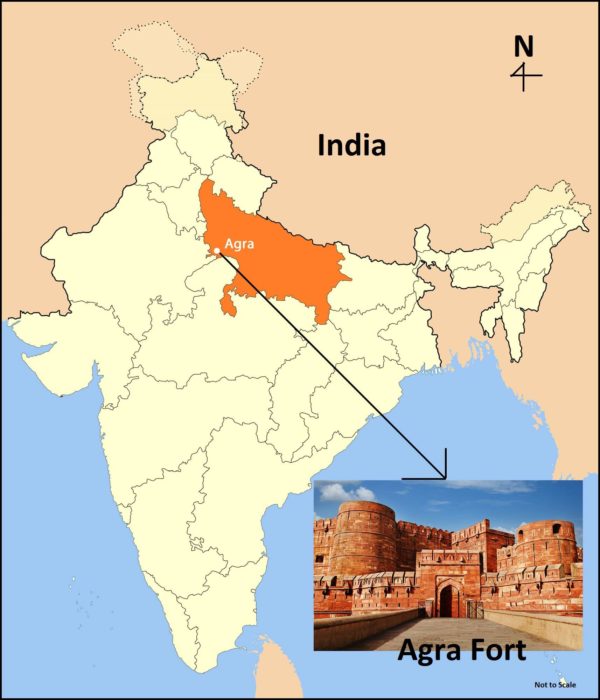 The Shikandar Lodi was the first Sultan who shifted his headquarters to Agra Fort and grew from there. He gave it a magnitude of second capital.

The present-day structure was built by the Mughals, son by son Akbar, Jahangir, Shah Jahan and Aurangzeb. Total Building of this fort was completed within 95 years by the 4th generation. The boundary wall is covered by 2 km area, make a round Shape. But the 70% area of this fort occupied by the Indian Army, Nobody was allowed over there. You have seen only 30% area of this fort.

What is the perfect time to visit Agra Fort?

Winter is the best time to visit this destination because this time you fill comfortable and easily communicate with this place.

Agra Fort was originally a brick fort known as Badalgarh, held by Raja Badal Singh Hindu Sikarwar Rajput king (c. 1475). It was mentioned for the first time in 1080 AD when a Ghaznavide force captured it. Sikandar Lodi (1488–1517) was the first Sultan of Delhi who shifted to Agra and lived in the fort. He governed the country from here and Agra assumed the importance of the second capital. He died in the fort in 1517 and his son, Ibrahim Lodi, held it for nine years until he was defeated and killed at Panipat in 1526.

History of Agra Fort during the time of Mughal Emperor:

After the First Battle of Panipat in 1526, the first Mughal Babur stayed in the fort, in the palace of Ibrahim Lodi. The emperor Humayun was crowned in the fort in 1530. Humayun was defeated at Bilgram in 1540 by Sher Shah. The fort remained with the Suris till 1555, when Humanyun recaptured it. Adil Shah Suri’s general, Hemu, recaptured Agra in 1556 and pursued its fleeing governor to Delhi where he met the Mughals in the Battle of Tughlaqabad.

Realising the importance of its central situation, Akbar made it his capital and arrived in Agra in 1558. When the great Akbar shifted his capital, it was in a ruined condition and Akbar had it rebuilt with red sandstone from Barauli area in Rajasthan. Architects laid the foundation and it was built with bricks in the inner core with sandstone on external surfaces. Some 4,000 builders worked on it daily for eight years, completing it in 1573.

Shah Jahan built the beautiful Taj Mahal in the memory of his wife, Mumtaz Mahal. He destroyed some of the earlier buildings inside the Agra Fort to make his own. Agra fort was built primarily as the molecular structure by ugh birth but was later transformed into a palace by Shah Jahan. Shah Jahan was imprisoned by his son or in jail for 8 years in the octagonal tower known as the cement verge of Agra Fort. It is rumoured that Shah Jahan died in Muasamman Burj, a tower with a marble balcony with a view of the Taj Mahal. The fort was invaded and captured by the Maratha Empire in the early 18th century.

Most important features of Agra Fort: 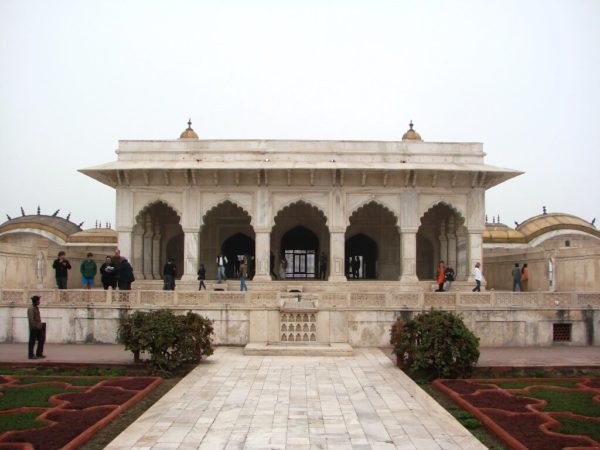 The Khas Mahal of Agra Fort was the model for diwan-i-Khas at the red fort in Delhi. The Yamuna River floated on the straight eastern edge of the fort and the Emperor’s had their own bathing heart here.

The diwan-i-Khas of Agra fort once housed Shah Jahan’s legendary Peacock Throne, which was made with precious stones including the famous Kohinoor diamond. 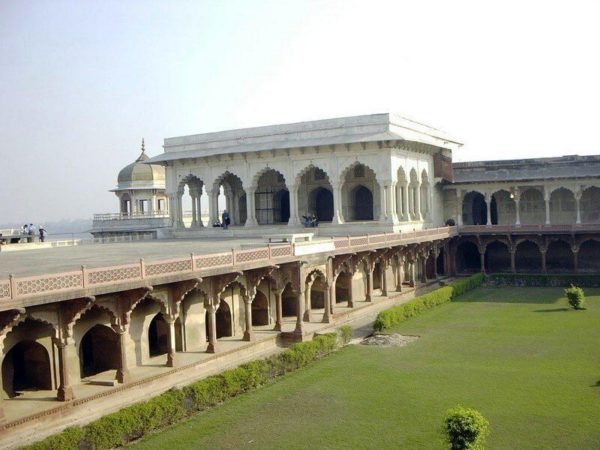 A huge part of the Agra fort was converted into army ballads by the British, which was not assessable to the public.

It was a bedroom for Shah Jahan. Both Right and left side of the Khas Mahal there are two another beautiful Mahal are situated, which are known as Rosan Nara Mahal and Jahan Nara Mahal. This palace name is derived from Shah Jahan’s two beautiful daughters. 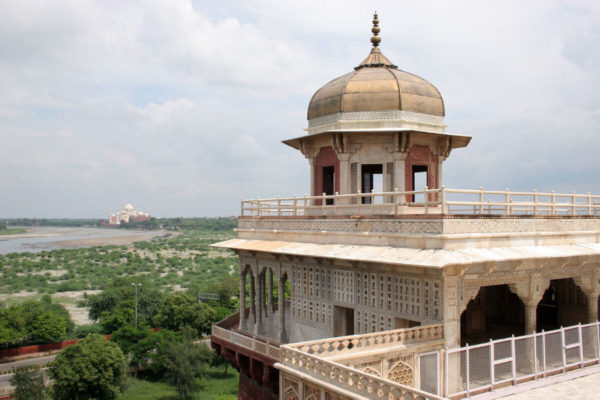 A large, octagonal tower with a balcony facing the Taj Mahal. 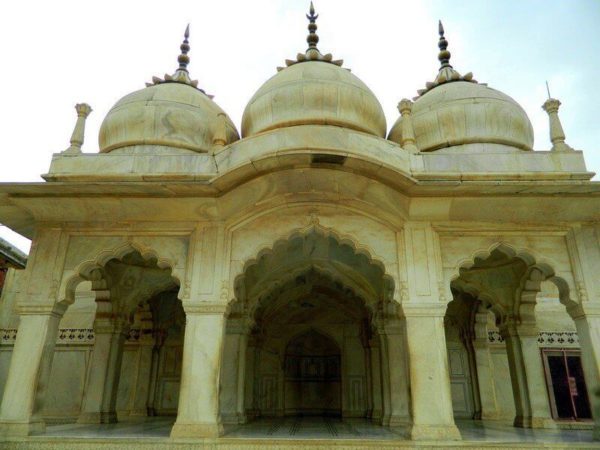 Nagina Masjid is small but it was built by Shah Jahan at the Agra Fort. It was poorly built for the ladies of the fort. 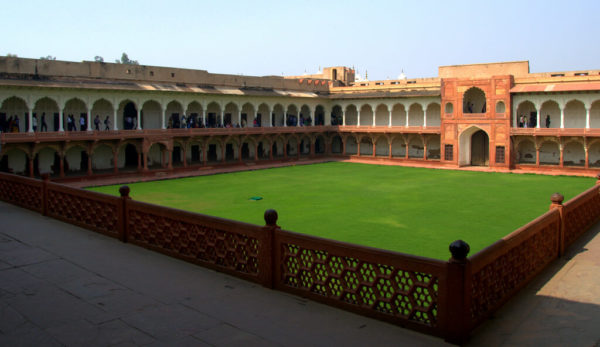 Mina Bazar was a famous bazar for the Mughals ladies inside the Agra Fort. The word ‘Mina’ means ‘jewellery’ and the word ’Bazar’ means ‘Market’.

Watch the review of Agra Fort

Agra Fort is a symbol of India and one of the most popular landmarks in India. I hope you enjoyed reading about the Agra Fort.

Agra Fort is open on all Days from Sunrise to Sunset.