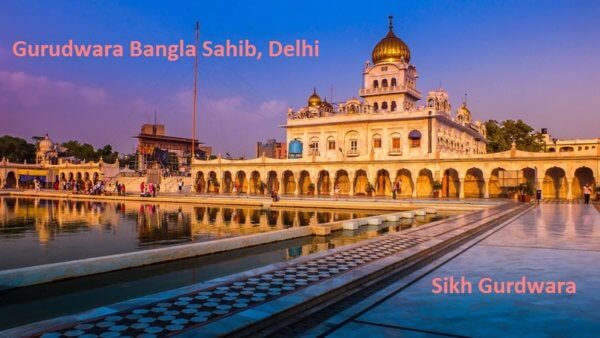 Gurudwara Bangla Sahib is one of the historic Gurudwara in Delhi. Commemorates the visit by the Sikh Guru Guru Har Krishan. The building was once known as Jai Singh Pura palace owned by Raja Jai Singh of Amber.  The 7th Sikh Guru was displeased with his elder son Ram Rai for deliberately misinterpreting one him in the Guru Granth Sahib in order to appease Emperor Aurangzeb. Ram Ray was considered unworthy of guruship, which was then bestowed on the younger son guru Har Krishan. He succeeded to the guru guardi in 1661 at the age of six. Baba Ram Ray challenged his father’s decision and complained to Emperor Aurangzeb by whom he was favoured in 1664 the emperor summoned the bail guru to Delhi the fact is that guru Har Krishan already embodied the light of the gurus and even when he was barely 5 years old, he had been tried and tested as a perfect fearless and fully illuminated soul. In 1664 the emperor summoned the ball guru to Delhi Guruji only agreed to come to Delhi at the persuasion by Raja Jai Singh. The raja convinced the emperor to allow the six themselves to choose their spiritual leader. Guru Har Krishan was the clear choice of the six Guruji served the poor and the sick distributing medicines, food and clothes to the needy. He directed the van der Gamal to use the daily offerings made to the guru by disciples to help the needy and soon stories about his healing powers spread widely. Among the many admirers of Guruji was Delhi’s Muslims who were impressed by the purity of his outlook and referred to him fondly as volatile of the childhood prophet. In 1664 during an outbreak of smallpox in Delhi young guru Har Krishan moved among the poor and the needy providing succour. Also, people believed that the water reservoir near Guruji’s residents was sanctified and would cure the disease. Unfortunately, Guru Ji himself contracted smallpox and knowing his end to be near asked to be moved to the banks of the Yamuna River. The marvellous bungalow where Guruji had spent time in Delhi was to become an important Sikh Shrine and came to be known as Gurudwara Bangla Sahib. Raja Jai Singh had a small structure constructed over the well to store the holy water, even today devotees take this holy water as healing Amrit to cure all their ailments. In 1973 a beautiful sarover or tank was built adjacent to the Gurudwara. Throughout the day the strains of melodious kirtan can be heard. Thousands of daily visitors include devotees and tourist. The only stipulation for any visitor to the Gurudwara complex is to cover their head with the staff as a mark of respect and to remove their shoes also as tobacco is a substance banned in Sikhism. No one may smoke or use tobacco on the premises. There is a large lunger hall with an adjoining kitchen as in all Sikh Gurudwara’s lunger or the free kitchen is open to all people irrespective of religion or race and is normally a meal of dal and rotis. Voluntary service is one of the cornerstone resets of Sikhism. Men, women children all volunteer their time and efforts to help in preparing the lunger together with designated save others and in some Gurudwara’s special technology has been developed to make large numbers of rotis. Others volunteer their service in various aspects around the Gurudwara in keeping the premises clean, cleaning utensils and looking after the shoes of the pilgrims. Thousands of devotees Bangla Sahib Gurudwara remains a living memorial a testament to the healing grace of Sri Guru Har Krishan Ji.

Gurudwara Bangla Sahib is an important landmark in Delhi, India. I hope you enjoyed reading about this wonderful place.