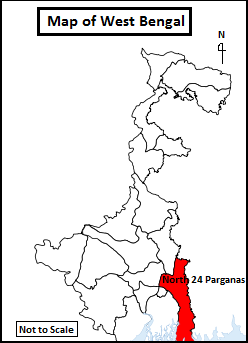 Here in this post, I have prepared a full list of tourist spots in North 24 Parganas District. Look at the list of Best spots in below-

Dakshineshwar Temple in North 24 Parganas
1 of 3

Dakshineswar is temple town near to Kolkata. It is situated on the bank of the Hooghly River. This small town is popular for its Holy Kali Mata temple, 12 Lord Shiva temples and a Radha- Krishna Temple. Dakshineswar is famous as a Meditational place of Shri Ramakrishna Paramahansa, who was a saint and guru of Swami Vivekananda.

Adyapeath Temple is a white marble temple situated at Dakshineswar town in North 24 Parganas District. This temple stands as a symbol of the unity of all religious. The temple has three altars, one is situated beside the other. Lord Ram is located in the first altar. Lord Krishna and Radha is placed in the topmost altar. Thousands of devotees come here to celebrating various types of Puja festivals.

Nalban Park or Nalban Boating Complex is an ideal tourist destination of North 24 Parganas district. It is spread out over 400 acres area of Salt Lake City. The lake of this park is so big and beautiful nature make this place as a wonderful Picnic spot. The beautiful name ‘Nalban’ combination of two words. The words ‘Nal’ means ‘Lake’ and the word ‘ban’ means ‘forest’. Various types of boating facilities are also available in this lake, such as paddle boats, shikaras and rowing boats.

Bibhutibhushan wildlife Sanctuary or park is situated on the bank of the Ichhamati River. It is spread out over 640 hectares of forestland and just 28 km away from Bangaon town. When this sanctuary was established its name was “Parmadan”.  Letter it is known as its present name Bibhutibhushan wildlife Sanctuary, who was a famous Bengali author. This wildlife sanctuary is famous for spotted deer. More than 200 deer are present in this Sanctuary.

Nicco park in west bengal
1 of 4

Taki is located between the border area of India and Bangladesh. The main attraction of this silent place is Ichhamati River. An imaginary line through the middle of the river divided West Bengal and Bangladesh. Local people and a huge number of visitors come here to the annual reunion on Dashami.   Taki has known for sweets, in Bengali, it’s called “Chanar Malpoa”.

A memorial to Gandhi Ji, a garden and a silent library is the main attraction of Jawahar Kunj Park in North 24 Parganas district. This place is an ideal place for a weekend trip. It is located 25 kilometers away from Barakpurcantonment. This beautiful park was built by the East India Company.

Chandraketugarh is a port-city of West Bengal and it was discovered in the year 1995. It is an archaeological site, located on the banks of the Vidyadhari River. Now, this site is maintenance by Archaeological Survey of India, Kolkata Circle. This site is the evidence of the Maurya to the Pala ages have been excavated, which include clay pipes, drainage systems, minted copper coins, ivory bangles and beads, bronze and terracotta images.

The park is dedicated to the Mangal Pandey, who started “Sepoy Mutiny” and was a freedom fighter. He shot and wounded two British Army’s officers. After that Mangal Panday was hanged on 8 April 1857. But the revolution for freedom spread fluently. Now this place is famous as a beautiful park for young generations, so many colleges are situated nearby like Mahadevananda Mahavidyalaya and Surendra Nath College. Once Rastra guru Surendra Nath Bandyopadhyay, the father of Indian national Movement lived here.

Gandhi Ghat is one of the most popular spots in Barrackpore. Once upon a time, Mahatma Gandhi Ji has spent time in this area. This place becomes a good tourist destination because here present the heritage site of Gandhi Ji. This is the most beautiful relaxing place. At the time of sunset, a scenic view of this place attracts many local peoples.

Gandhi Museum is located near Gandhi Ghat. This museum is famous for antique collection. The Gandhi Museum has a rare collection of articles, journals and Books, which was used by Mahatma Gandhi Ji.

Kanchrapara is a market town in North 24 Parganas district. The major attraction of this town is Kanchrapara Railway Workshop, Market place, Railway Stadium and Ground etc.

Kanchrapara Railway Workshop was built in 1863. It supported the defense department of India for repairs to aircraft and manufacture of armored cars and grenade shells during World War II. In the year 1962, this workshop was reconstructed for electric locos electrical multiple unit stocks of Eastern and North Eastern Railways.

Railway Stadium and Ground is a silent place as it is surrounded by the trees. It is situated near Kanchrapara Railway Hospital. Every day Local boys practice here.

Halisahar is the birthplace of Bipin Bihari Ganguly, who was a famous freedom fighter. The prime attraction of Halisahar is Ramprasad Vita, where the saint Ramprasad was born. Ramprasad was famous as a beautiful devotional singer. He was also the court poet of the king Krishna Chandra of Nadia. Ramprasd composed many songs this all are called Ramprasadi songs. This all songs are dedicated to Kali Mata. The Guru Griha of Sri Chaitanya Mahaprabhu is also situated here.

Naihati is a small town of North 24 Parganas District. It is just 35 kilometers away from Sealdah.  Naihati is a popular tourist destination because it is the birthplace of many popular Writers, singers, composers and freedom fighters, such as Bankim Chandra Chatterjee, Haraprasad Shastri, Shyamal Mitra, Mrinal kanti Ghoshand, Samaresh bose, Raghav Chatterjee, Sukanta Bhattacharyya, Keshab Sen etc. Bankim Chandra Chatterjee is one of the famous composers of India, who composed the national song of India – “Bande Mataram”. 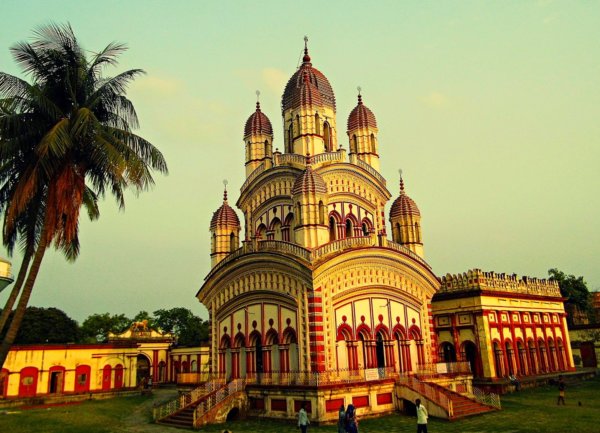 Beautiful temples in Khardaha
1 of 3

Khardaha is a temple city in North 24 Parganas District. So many beautiful temples are situated in this city, such as 25 Dochala Shiva temples, Shyamsundar Temple, Khardha Gosto Mandir etc. Dol and Ras are the main festivals of this city. During Dol yatra and Rash Purnima here, many people come to celebrating this two festival. This all temple are collected a huge number of local devotees every day.

25 Dochala Shiva temples are one of the oldest temples of this city. But this temple is now under reconstruction by the Archaeological Survey of India. This temple was dedicated to Lord Shiva. 26 numbers of Shiva lingas are present in this temple.

Indian Statistical Institute is situated in Baranagar city. It is one of the most important cities of North 24 Parganas district. Others major attraction of this place is Baranagar Math, Udayan batti, Pathbari Math, Alambazar math, Rasmoni Mandir, Pramanick  Kalibari etc. 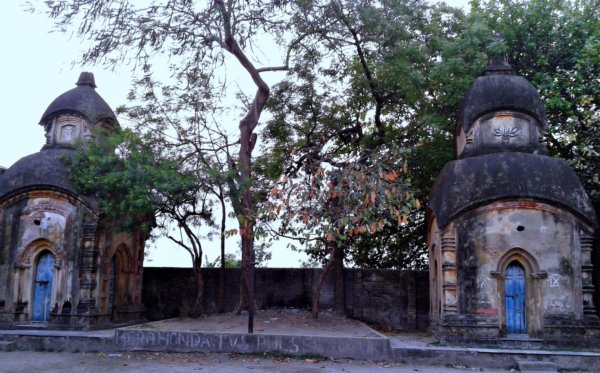 The Indian Statistical Institute was founded by Prasanta Chandra Mahalanobis in 1931, who was an Indian Scientist and applied statistician. It was declared the institute of national importance in 1959.

Acquatica is the most popular and largest amusement park in North 24 Parganas District. It has a bewildering variety of water sports that attracts the young generation. This park is covered a huge area of this district. Aquatica has a number of rides including tremendously exciting ones like the Black Hole, the Wave Pool, Niagara Falls, surf racer, Tornado and the Aqua Dance Floor. There is a GoKarting track adjacent to Aquatica for the die-hard karting lovers. Regular parties and Fashion shows are hosted here, especially in the winter. There is also Deluxe AC. Rooms suits, Conference Hall, Party Hall, Board Room and Food Courts available.

If you love adventure, so friends don’t waste your time and visit all amazing destination in North 24 Parganas District, which I have already mentioned.