A Full list of popular attraction of East Champaran District are:

Mothihari is the District headquarters of East Champaran. It is an ancient historical place and a good destination for adventure lovers. Motihari has been considered as the springboard for Indian’s independence. In April 1917, Bapu (Mahatma Gandhi) visited the place and his beautiful speech influences the people into joining the freedom struggle.

The Kesaria Bodh Stupa has located just 40 kilometres away from the Motihari. It is considered as one of the tallest and the largest Buddhist Stupas in the world. The stupa was founded by the Archaeological Survey of India (ASI) in the year 1998. The 104 feet tall stupa collects huge numbers of Visitors. 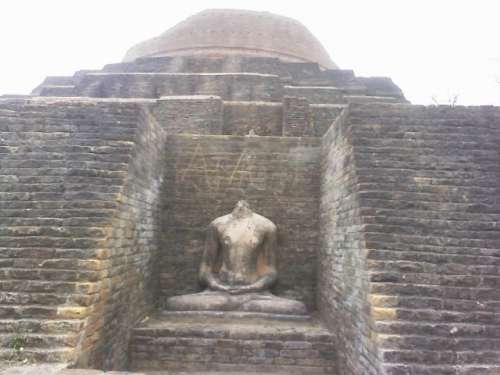 Huseni is a wonderful lake located 50 kilometres away from Motihari and 8 kilometres away from Kesariya Bazar. The lake covered a long area of the surface and various types of fishes are found here. During the winter season, many migratory birds can be spotted here. Beautiful nature and weather make this place as an ideal picnic spot.

The Areja temple is also known as Someshwar Shiva Temple. It is situated on the Banks of Telie River. Many visitors come here from a far distance to celebrating the Shrawani Mela in the months of July and August. Narega Park is an amusement Park located near Motihar. This is very cool and relaxing place for people. This is the best place for hanging out and family gathering. It is surrounded by the natural plants and green grass which gives full enjoyment. This park is too good for the morning walk, jogging, picnic etc.

The Gandhi Sangrahalaya is famous for its huge collection of relics and photographs of the Champaran Satyagraha. The Gandhi Memorial pillar was designed by Nand Lal Bose, who was a famous designer of Shantiniketan.  The stone of this pillar was laid on 10 June 1972 by the Governor, Mr D.K.Barooch. The 48 feet high stone pillar is situated at the place where Gandhi Jee was presented in the court.

Sitakund is a village located 16 kilometres from Motihar Town. This village is famous for Mata Sita’s temple and an ancient fort. Sitakund considers as a popular pilgrim centre. Every year at the time of Ramnavami occasion here a beautiful fair arranged by the local people. Many people come here for celebrating their expensive moments. This village and the fort surrounded by various holy temples, such as Ram- Sita Mandir, Hanuman Mandir, Vishnu Mandir, Durga Temple etc. Lord Ram, Sita Mata, Ravan, Hanumanji, Ganesh, Durga Mata these all images of Gods are inscribed in this village.

Orwell’s Birth Place in Motihari is a wonderful tourist destination in East Champaran. George Orwell was a famous English writer of the 20th century. He was born in 1903 and popular for his works like ‘Nineteen Eighty-Four‘ and ‘Animal Farm‘. There are so many features like plaque, writing, etc. in this cottage attracts huge numbers of visitors.

George Orwell home & museum in Motihari in Bihar
1 of 2

If you love adventure, so friends don’t waste your time and visit all amazing destination in East Champaran District, which I have already mentioned.