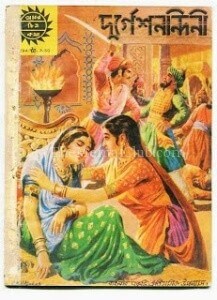 Bankim Chandra Chatterjee was born on 27th June 1838 in the village Knathalpara of the 24 Paraganas District of Bengal. He belonged to a family of Brahmins. Bankim Chandra’s father Yadav Chandra Chattopadhyaya was in government service and his mother was a pious, good and affectionate lady. Bankim Chandra Chatterjee had his early education in Midnapur. He was a brilliant student. After his early education in Midnapur Bankim Chandra Chatterji joined the Mohsin College at Hoogly and studied there for six years. He later obtained a degree in Law as well, in 1869. Bankim Chandra was appointed Deputy Magistrate. He was in Government service for thirty-two years and retired in 1891. Bankim Chandra first wrote poems. Then he wrote a novel in English. But after this he began to write novels in Bengali.Bankim wrote fifteen novels in all. Durgeshnandini, his first Bengali romance, was published in 1865. His famous novels include Kapalkundala (1866), Mrinalini (1869), Vishbriksha (1873), Chandrasekhar (1877), Rajani (1877), Rajsimha (1881), and Devi Chaudhurani (1884). Bankim Chandra Chatterjee most famous novel was AnandMath (1882). Anand Math contained the song “Bande Mataram”, which was later adopted as National Song. His novels have been translated in almost all the major languages of India. He died in April 8, 1894.