Hi Guys!, Today my article is all about How Easy To Earn Money From Google Opinion Rewards. created by the Google Surveys team. Google Opinion Rewards is an app which lets users get credit on Google Play Store by answering some surveys. The app is available on the Play Store. It allows users to fill up surveys and win Google Play credits against them. Earlier, this app was available in only a few countries. For the uninitiated, the Google Opinion app focusses on quick surveys and was made by Google Consumer Surveys.  Just read this article from the beginning to the end.

How Easy To Earn Money From Google Opinion Rewards

Why Should You Use Google Opinion Rewards?

Google is one of the most trusted and world famous company as all know. Besides, The app is built by Google Consumer Surveys. So, there is no risk and fake issues while using this app.

The best and interesting part of the Google Opinion Rewards app now is that you will be capable to earn Google Play credits. You can use them to buy any kind of paid apps and other content from Google Play Store.

There is no restriction on investment and the user can explore any kind of paid content from games to song streaming services using the reward amount.

How do you Uninstall the Default Apps of Windows 10

Benefits Of Advertisers and Third-Party Customers:

Google Opinion Rewards is also a cost-effective solution for advertisers too, as they get valuable feedback from lakhs of users from various types of backgrounds. The app is open for all advertisers and third-party customers.

How To Install Google Opinion Rewards App and Start Earning?

Step 1. Getting started is very easy. Download the app from google play store >> install it to your Device.

Step 2. Next, you have to sign up, where Google will ask you for your first name, last name, and your Pin code. You’ll have to choose India as the country. It will also ask some basic questions like your age, gender, income group (you can choose not to share this), along with your preferred language for answering the surveys.

Step 3. After completing the signup process Google will send a user notification once they are “Approved” to answer surveys.

Step 4. If you have been approved by Google then you will able to start earning by answering some basic questions about yourself. After that Google will send you surveys around once a week, although it may be more or less frequent. You’ll get a notification on your phone when a short and relevant survey is ready for you and can receive up to $1 in Play credit for completing it.

5 Illegal Android Apps Which May Send You To Prison

How Will Surveys Come To You?

If you want to be available for the new survey, you will be needed to originally sign up and provide basic information about yourself. The surveys will be based on the information that you provide on the application.

Google says that all of these surveys will be kept anonymous, and it can’t be linked to an account or to a specific user. Though, signing up for the app itself doesn’t mean you’ll automatically get surveys and start earning credit. Google says it will send a user notification once they are “Approved” to answer surveys. 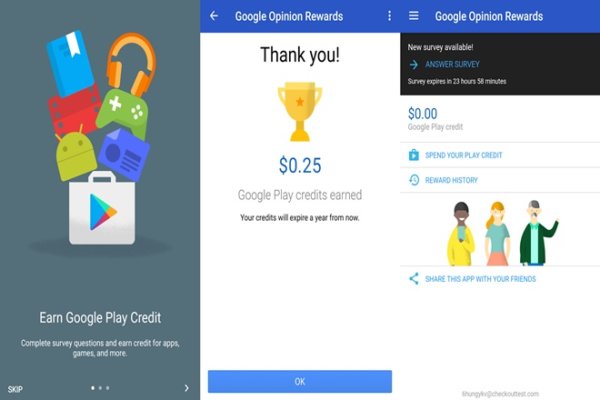 How Much Money Can I Earn From Google Payments Rewards?

In India, the rewards will begin at Rs 10. However, there is no information on the highest amount you can win from Google via the surveys.

5 Essential Productivity Apps and Programs for 2017

If you like this article and If this app is helpful for you then you may leave a comment below in the description. Thanks for reading.

5 Smart Ways To Manage Your Bank Loans Better In 2021

A Quick Guide to Choosing the Perfect Australian NBN Plan

How to Make Money From PTC Sites without Investment at Home?

What is Google Payment Tez App? How to Use It &...

Some Rules of earning dollar by Blogging

How to make money blogging